Well, it happened. I aged.
I think the world stopped rotating for a second there.
And then, when time resumed, I had even more incentive for gray-hairedness.

Observations on life at 35

Thanks to everyone who said Happy Birthday.
No comments:

Some other highlights of this trip include:
El Yunque:
Just got back from El Yunque, the mountain peak in the Puerto Rican rain forest. Exciting. Views from the top of the mountain from a stone tower after an 8k hike, and swimming under a waterfall after an 8k walk. It was sweet.

Culebra:
Snorkeling at an amazing coral reef at Carlos Rosario reserve on Isla Culebra. Noel & Cindy getting stuck on the coral reef. Hanging w/Yari and Natalie from Long Island, Karaoke singing "Day-O" among bats & old men. The mosquito-ridden Mamacita's hotel. Getting lost on Playa Flamenco after the sun dropped. Kiko the taxi driver drinking a beer & driving as he laughed about me getting lost on a 5 mile island.

Fajardo - Bahia Fósforo
After getting back from Culebra, made a snap decision to see the 'bioluminescent' bay at Fajardo. Called Todd, he told me where to go. I had to hurry. Found the bay w/some directions, caught a last-minute kayak w/Peter's Eco-Tours (offered at El Conquistador hotel. Mind blowing, kayaking thru a completely dark mangrove forest. Arriving at the phosphorous plankton bay, then hopping in the water as the full moon came out. Watching explosions of light as I swam. A miracle of nature. (And then the nasty night at Anchor Inn w/the key getting stuck in the door, no food, a/c pointed onto bed, and waking up covered w/mosquito bites. Could've stayed at El Conquistador for a ton of $$$, but picked the nasty for $60.)

Hitchhiker:
Also on the way back gave Magdalena a ride, she gave me directions (I was lost -- again), and we talked in Spanish about her life. She's 20, has 3 children (eldest is 5 yrs old), and her husband left in January. She looked 15. I couldn't believe the story, floored me. I dropped her at her job, she was 1 hour late. She liked my tattoos, showed me her new one on her back.

Puerto Rico:
What a trippy island. Amazing underwater treasures. Deep fried everything, hard to find vegetables. Curviest people I've ever seen, including a pronounced stomach arc. Survival thru heat and humidity unlike ANYTHING I've experienced except Thailand in Mar 2000 -- and this is the COOL season!!! I can't imagine the hot season, and don't want to know!

And had a wakeup call on my physique. Going to get some weights, start swimming again. I don't want to lose my build yet. I enjoy the capability of doing things -- even if it IS hard to work into my life. Weights and swimming at least, hope to do something fun & nature-oriented at least once a month (regardless of work requirements, new pad requirements, etc).

I miss my lovely girlfriend oh so much. I'm very excited to get back and re-unite. I miss her smile and laugh, her touch, and her care.
No comments:

Twin Towers - Did they Fall or Explode

Research Paper from Prof Steven Jones suggesting that Twin Towers may have been exploded. Has some interesting evidence, including Building 7 falling w/o any hit, and 'molten metal' being found in the basements and yet not enough heat in the fires was there to melt metal - unless there was Thermite or other high-temp explosives.
No comments:

Just got back from 1st complete day in PR.

Todd, myself, and his g/f Noraida went on a road trip from Ponce to San Juan. We went to a cool 'blue flag' (preserved) beach, and when it started to pour rain on us (tropical storm) we went to San Juan's Old City.
We walked around the city, had some groovy Venezuelan food (Cachaca = sweet corn tortillas w/chicken), saw a live music concert, walked around El Castillo de Morros (w/tons of cats hanging out).
Got stuck in the rain, met an American beggar that said his whole family had died in a month, and he just walked to the airport & took a flight onto ANY plane -- wound up in PR 3 mo's ago. He said he had $$$ for 3 weeks, and then began begging. For some reason, his story hit me more than the other heroin beggars, so I gave him $10. Y'never know -- although Todd thinks the guy ran off to the Liquor Store.
We then went to a sports bar the guy recommended, 'The Brickhouse', & nibbled Pinchos de Pollo (BBQ chicken on a stick). Yum... I'd go back there b/c their food looked so damned good.
Todd had a few beers, so I drove back. Wow, driving PR roads is a trip!!! Not the comfy driving of the USA -- I never knew if the drivers, the road , or Todd's rental car would be sketchy. All 3 had their moments!
Just got back, but I'm wide awake b/c of the coffee in the AM. Whatever, it's all good.
2 points:
1) My spanish is slowly coming back, but it's difficult to get the sentences that are 'new' to work. But I can understand some stuff. The PR accent (that I've heard so far) reminds me of Spain, minus the lisp. Noraita drops the ends of words just like my old friends in Castellano Spain.
2) My cold almost vanished today. THANK GOD! I think the accupuncturist was right, and I was fighting some allergy in Berkeley. Maybe I'll take allergy pills next time. Or maybe it's just the herbs, but whatever -- I'm feeling much better. Hope I'm done soon w/this cold!!!
No comments:

I'm off to Puerto Rico for 10 days! Psyched! Going to see a Todd, a friend from UCSB, in Ponce, PR. From what I've read, it will be fairly powerful b/c PR is such an example of America's actual EMPIRE. I want to bring my video camera, but am abstaining b/c of added weight since I'm sick (fighting off a chest infection). Oh well...

Bizarre story on EPA seeking to resume human testing of pesticides on poor, orphans, mentally deranged, and college students was on KPFA last night. Sounded like scifi, but it's real. Senator Bill Nelson's & Barbara Boxer's position is astounding. The White House is trying to end a ban on human testing.

Also, apparently the record oil profits are NOT due to actual supply & demand, but oil co SPECULATION about supply and demand. So the oil industry pulled in $94bil based on speculation of less supply... and now Oil execs fight against getting their profits taxed. I admire their tenaciousness, but their courage is nil -- since Bush has clearly given the thumbs up since Enron.
The question the Oil Corps are facing is, 'Did they gouge the public?'
My opinion --> Oil Corps have done many things to prevent a true 'free market' in the energy domain, specifically around alternative energy: preventing production of and blocking public access to it. These corps take public subsidies for oil rigs/platforms and exploration and have huge tax loopholes on their organizations. They pay (often minor) punitive damages in the event of spills that may damage habitats for hundreds of years. So for me, whether or not they gouge is LESS relevant than whether or not they are good for humanity, in their current form. I say, the smaller the better. The Oil Corps would function better if they were smaller & diverse, instead of bloated money/power machines. (And of course they gouge!!)
No comments:

I offer this ingenious idea to anyone for free.
(I also posted it to Analog RPGers on Tribe.net and RPG Creatores on Tribe.net)

ANYWAY, here's the gist of the idea:

GM buys CD and prints up the 'GM rulebook', adding or removing optional rules as they like. They can post their 'game settings' online if they want, maybe even on the game's forum site. (The settings could be an .xml file that anyone could see through if they want.)

Gamers use the 'player' CD to generate their character. The CD helps the player 'build a book' that includes everything their character needs, nothing they don't need, and contains the GM mods, and they can print the book out -- and send a 'config' file to the GM so they can see what the character is.
Players also can print 'future' sections for their characters by listing some areas they'd like to grow and see the options for those paths.

(Game Creators could pool their resources to make this framework for this 'game printing' kit. If it's standardized, it'd be easier for designers & more fun for players, IMHO. Maybe make it 'open-source' and have some programmers make it for free, if you can coerce enough prog'ers.)

** THIS REVOLUTIONARY IDEA will cut down paper waste, gameshops being flooded w/unneeded splat books, and make games cheaper for gamers **

A few additional thoughts:
If player or GM wanted a sexy hardbound book, they can send their config file to the publisher and pay the $40 or so to have it printed & bound.

Players might not know what a 'mysterious' character (or object) could do, b/c THE RULES WOULD NOT BE IN THEIR HANDS. Only the GM & the applicable character would know what their options were. Imagine a fantasy game where only GM & magic player know how spells are cast, or psi characters and GM only know the available psi powers. The 'oooh' and 'aaaah' are immediately back! (Same goes w/Magic Items, Cyber Gear, mutations, superpowers, etc etc) The same concept is applicable to NPCs & monsters as well.

The RPG CD can come in a hardbound (or just nice quality) quick ref sheet or GM screen, & has sample PCs & NPCs & monsters or background flavor, so the new gamer can appreciate what's being offered.

The printing companies could lose in profits -- but their production costs would drop like rocks. Their net profit might be higher if they have more volume, b/c CD's could be released for $10 or less -- for an entire game. The printouts could still have beautiful art imbedded, so the quality could still be high.

Game updates could be posted online & added into game for a minor fee, like $1 or so.

Bush made some nice statements today. One includes his statement 'we don't torture' -- which he said WHILE the White House is fighting a Congressional BAN on torture, specifically seeking an excemption for the CIA!! Give me a break, Fascist! (I for one wonder if the American media will challenge him on this?)

Thank GOD Bush and Republicans are too deeply rooted in their own fascist ideology that they can't see they're walking off the cliff! And good riddance!

While it will take the USA (and the world) years to undo the damage, if it's even possible. Meanwhile, even if Bush & Co get jailtime for their crimes against 'God and Man', their friends and families will be reaping the benefits of their unprecedented profiteering swindle off of public money.

Who said 'Crime Doesn't Pay'? It pays damned good if you're white-collar, and even better if you're King -- I mean, President.
No comments: 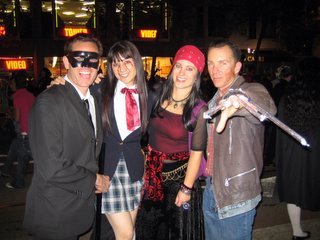 Yes! Halloween in the Castro!!

It was fun. It was kinda creepy, especially those guys who get too into their creepy death costumes. The Freddies, the Jasons, the various forms of death, killers, Scream guys, slashers, murderers, etc. And somehow, we survived. 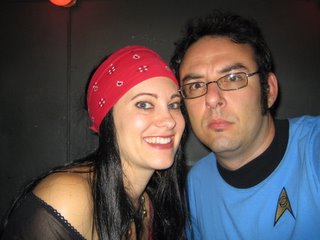 I am amazed at my luck. I picked up this hot Gypsy chick. Must've been the military outfit. Chicks dig the uniform.

She seems to have ensorcelled me with her witchcraft. I did a psychic mind-meld with her. She commanded me to look into her crystal-ball ring. I did ... and I don't remember anything since!
No comments: