How can VideoRevolt.net become a real thriving business which can help the earth, earn some bucks, and help fellow multimedia artists around the world?

This morning at 6am I realized that I'm not alone here -- so I thought I'd ask YOU peeps!

The concept so far:

"The revolution will not be televised";
the Video (*R)Evolution flows along internet streams of public media.

The core revolution we want to see as humans can be broken into 3 core concepts:
freedom, mutual respect, and sustainability.

The Video (*R)evolution has the chance to embody the features which we want to see born from it; including peacefulness, environmental awareness, care for the earth and all of her creatures, and also entertainment -- while sharing wealth, giving credit where credit is due, empowering true democratic practices, and enabling the artistic authentic voices currently being squashed by the corporate media takeover of 9/11 & y2k.

And now, the question I pose to all of you -- how can we do this?

We have the domain name ... the rest will manifest...

Specifics -- oops, almost forgot.
Acquire a reasonably priced location in the heart of the (*R)evolution (likely Berkeley),
gather together a lot of (r)evolutionary content made by real people,
and start streaming content starting only on internet
(& later perhaps on Cable & U-verse -- if that's important). 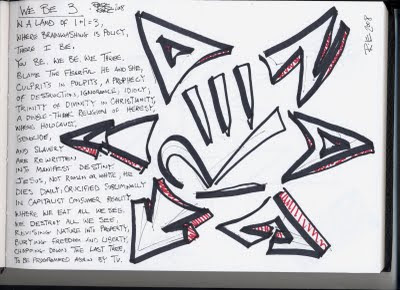 Hello Drupalites, here's my Drupal proposal to you:
I need your help to fix the Earth.

I'm the guy that posted a flyer at BADCamp(.net) 2009
on the wall on plain notebook paper saying:
DRUPAL BRAINIACS
Share mindpower & heal the Earth
We need you on a no-budget website to fix our planet.
Post your name/email & we'll contact you.
(I also may just have chatted w/you at BADCamp, or maybe I just got your bizcard somehow.) 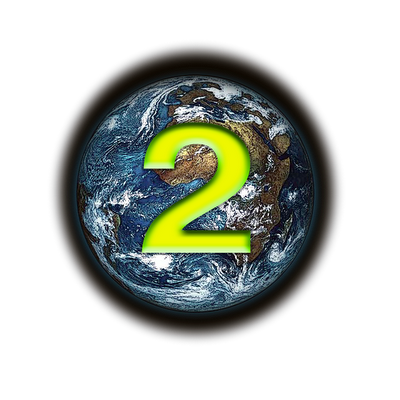 Mission Statement:
Humanity has created a lot of neat things in our short period on the Earth, but we have made a lot of mistakes and have injured our planet. If we don't make changes, we may ruin our planet's ecosystem (and possibly wipe ourselves out as well). So we are challenged to re-vision, re-think, and re-do almost everything we have ever done.
Earthv2.org will become a tool to enable the needed collaborating of visionaries and creators to rework our planet into the UTOPIA we really want.

How this whole thing will work:
Earthv2 is an open-source community (running on Drupal) which shares all information in community forums. Anyone can read, only members can post, tag, & vote.
Initially Earthv2 will have three main forum catagories:
Material -- stuff we make, have made, want to make
Social -- things we do, culture, society, philosophies
Spiritual -- inspirations, messages from other dimensions, morality, souls & spirits
Community members will post their thread concept, and other people can expand, comment, offer their own version, flush it out, etc. The content belongs to the community. Then the community can up/down VOTE the comment, which will affect it's Drupal weight & send it upwards or downwards, and affect it's score out of 10.
At any point, a member can 'TAG' the content with a "BUILDING IT" or "MAKING IT" tag, which means they have begun to act on this thread, and they can post URL's and info for acquiring their thing. Then the Earthv2 community can 'close the loop' and evaluate the final products, give suggestions, and so on.
Other 'TAG's (for searching/sorting) would be 'plant', 'animal', 'tool', 'new idea', 'impossible to make', 'incredible idea', and so on. The list of tags could be quite broad, maybe open.

Just as competition and greed have injured the world, so will collaboration and sharing help rebuild Earthv2 into a Utopia we can be proud of.

And so then what? Well, then the founders of the site could claim the kudos of the world and march into the sunset...

While I'm not aiming to make millions / billions off this concept, I am open to the idea being profitable, and re-investing any earnings back into Earthv2 and making it stronger.
I really believe in many ways the collaboration/sharing concept is WHY we have the internet (or neural networks, or language, etc). But so far, Google & Facebook & universities & other developer groups have not given us the tools to make this -- but we can do it ourselves using OpenSource DRUPAL!!!

I invite you to help make Earthv2,
and maybe one day we can all say we helped the Earth
when the Earth needed our help the most.

Now down to specifics -- what does Earthv2 actually need?
As for me, I am a video and multimedia artist, and I want contribute as a graphic designer and a producer.

Personally, I have no issue with existing businesses hopping into forums to pitch their stuff. The interactivity will allow them to get feedback from the community. If the thread becomes dominated by their product, a moderator could split the thread off into it's own thread.

If a lot of money arrives at Earthv2.org, I am open to making this a topic we can discuss. For now, I suggest we send any money generated by Earthv2 back into it as a developing business, with a goal of making it self-supporting. If we gather enough $$$ to pay salaries, I'd definitely consider that. I'm interested to hear other people's viewpoints on this.

Rather than start a huge thread of emails & responses, I'm going to start a post on my blog & people (drupal folks or anyone) can comment on this as they like.

I look forward to helping fix the Earth with you.
Will you step up and help the Earth?

PS: This is not the right logo posted in this blog entry, I had the same Earth with a "v2" on it (not just a #2), but I don't have Photoshop re-installed yet and for some reason I had emailed myself this version of the logo awhile back. So fate has spoken.
1 comment:

Back and Forth on Animal Experimentation

This email chain was in response to an article in Wired.com about animal experimentation. The article is on the wired website here: http://www.wired.com/magazine/2009/10/mf_optigenetics/

I thought I'd post it on my website and see if anyone cared to voice their feelings on this.
Please chime in with your comments on this debate, your feelings, or the article in the Wired magazine.

On Wed, Nov 4, 2009, rekzkarz wrote:
> Michael & Wired,
>
> As someone that is not particularly religious, nor 'PETA', nor a vegetarian, I was still disturbed by the positive spin built into this article on mixing mice brain genetics with pond scum (chlorophyll) and then having LEDs inserted into the mice brains -- and not once any question about morality, or if this is acceptable, or the question of 'means to an end' is relevant, etc.
> The fact that 'Frankenstein' is not written in the article is noteworthy, but what I find more lacking is the absence of ANY moral questioning.
> Perhaps it's too 'retro' to put the question in Wired ('what the fuck are these mad scientists doing to these living creatures in their secret laboratories'), but I was struck by the total lack of rights of living creatures to the extent that, from our 'warped human-focussed scientific perspective', it seems all creatures are nothing more than tools for human progress.
> Who gave these people the right to torture & warp these animals 'in the name of science'?
> I think a bizarre side-product of your article is the disgust I feel at reading how real scientists are actually WORSE than the most evil doctors in scifi and films!
>
> Ari -- rekzkarz.com (blog)
> sent via iPhone-bot

--- Michael Chorost, the author, wrote me back on 11/8/09 ... but when I told him I had posted his response to my blog, he demanded I take it down immediately and said he had not given me permission.
I didn't know I needed permission to post his response, but I am a nice guy, so I'm taking it down.
But I'm leaving MY responses here, and the link to the article: http://www.wired.com/magazine/2009/10/mf_optigenetics/ 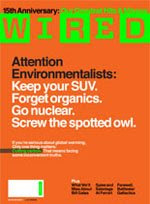 In some ways, my experience with this article in Wired reminds me of when I read an old Wired (15th Anniversary) cover "Nuclear Power is the new Green fuel" or something, and was completely obsessed with arguing with that writer & disputing the entire basis of the article.
(In fact, I'm going to email the writer, Amanda Grsicom Little, again about this damned propaganda article!)

This guy has a blogpost article supporting how Wired was on the right track with nuclear power.

Nope, sorry dude. WRONG!
Give me a break! While the Sun is nuclear powered, the Earth is completely powered by solar, wind, and thermal. The only reason we would need nuclear power is because we continue increasing our demand for power, and keep producing all this garbage!
But that's not a winning strategy (for us or the rest of the creatures of the Earth)!

I look forward to another response from you, please.

If I agreed with the core underlying issue, that human life must be preserved at all costs, I might agree with the explanation.

But I think the moral issue for me is that human life is not the apex of creation, the peak of the evolutionary process, which must be preserved. (In many ways, if you look at our world, doesn't it seem like the union of {human lack of foresight + greed + industrial revolution} can be seen as the biggest threats to life the Earth has ever faced?)

My view is that LIFE must be preserved, and that if humans understood their roles on Earth better, our moral goal would be to preserve 'all life in reasonable proportion', which would include inalienable rights to life for both plants & animals. Right now, human life is unacceptably dominating the Earth and destroying far too much of the Earth's billion-year evolved ecosphere -- and we are just now starting to feel the price of our unrestrained exploitation.

Humanity is continuing forward blindly, without considering the impacts of technology. (This is one of my problems with Wired, a magazine which endorses all forms of corporate-sponsored gadgeteering but hasn't seemed to realize that this makes a lot more non-biodegradable garbage.)

Humanity could be using it's vast resources to:

However, I see your point.
We need lots of $$$ in animal experimentation to help wealthy, 1st world children (and adults) to live to their fullest -- even while the already living & healthy children of 2nd & 3rd world countries starve to death b/c of lack of resources.

So far in this response, I hadn't even brought up the question of whether animals have inherent rights to life, liberty, equality, etc. I didn't even mention (until now) the fact that, simply b/c animals cannot speak a human language, they are treated as means to an ends, rather than our fellow brothers & sisters who have evolved over billions of years and share most of our DNA.
From my perspective, in one hundred years or so, the animal experiments you describe will likely be seen as equivalently evil and vile to the human experiments performed on Jews by the NAZI's.

But I say that b/c I can see from a larger perspective. It's a continuation the cycle of domination and exploitation which has in it's origins slavery, forced prostitution, and empire.

Here's a simple test to determine if the animal experimentation practice is sound morally, or is it reprehensible, cruel, and unjust:

How would you feel about this if the roles were reversed, and the animals were the superior life-form performing experiments on humans to ensure their extended survival?
Would you volunteer to be a test subject to have your brain experimented upon?
Why not?

As I said, I look forward to this next response from you.