Note: I gleaned a lot from Rom Sudo's Gear Faq (I recommend looking at Rom's spreadsheet which shows best items & abilities as well).

Here's my take on Gear:

Get it:
Acquire gear by buying packs or placing well at the end of an online combat Season.  (Rom Sudo says you can get gear in online combat, but I never have.)

Inventory Quirk:
One piece of gear can only go to 1 character, even if you have 3 copies of it.  Extra copies should be shattered for Shards.

Rarity:
1-3 stars = rarity, best gear is 3 stars (apparently you can evolve 3 star gears to 4 stars).  1& 2 star gears have 2 abilities, but only 1 starts unlocked.   To access 2nd ability, you  have to level up  gear 10x, then Evolve it.  This costs a lot of $$ and Shards.
3 star gears are generally strong, and they have a 3rd bonus ability only for one specific character, and they are the only source of Purple Shards (required to Evolve gear) when shattered.

I wrote this up because there's a 1/2 price sale on Gear Packs this weekend (end of Aug 2014) and I wanted to be clear about the mechanics of it myself.

Recommendations:
Skip gear if you have no Gold characters.  Golds are the gamechangers, Gear is not.  If you have a few Gold characters, maybe get some Gear for curiousity, but stil the best buy is the $75k gold pack or gather $400k for Red Son pack.  (I haven't been patient enough to do that yet.)

Gear will *NOT* decide a battle in favor of significantly weaker characters, but it could help a lot for evenly matched characters.
No comments:

Social Media -- enough ROI for us, the users?

A European friend of mine earnestly opposes social media because the product being sold is *us*, and yet we the users lack almost all control over content and we gain little benefit.

I argued otherwise, saying that a shrewd user can gain significantly: expanded social network, keep in contact with people no longer nearby, gain insight into lives and careers of friends and acquaintances, and get entertained by the latest viral joke and media clip.

But as social media is deepening, privacy policies are becoming less protective, the NSA (and likely other governmental and non-govt groups) have gained access to our personal data for 'big data' research, algorithms can now identify us by metadata and facial recognition (and tag us without our consent), and hackers seek to manipulate us by stealing our information and identities for various mischief and crime...

It seems a particularly good time to ask, "Are we getting enough from social media sites in return for access to so much of our personal information?"

Any opinions? Anyone (not) afraid?

Anyone concerned about their social media getting hacked & getting framed for something?

Anyone know of class-action lawsuits in progress to reclaim our ownership & control of our data?
(Reposted from comment on Linkedin)
No comments:

Combat Monsters - a great game made by Rubicon, a small shop.  Seen by devs as a financial failure, despite producing $110k expected in profits.  Fun game, however!

From Gamasutra, I found this really interesting interview - Combat Monsters - A Postmortem:
"The big bulge at the beginning was feature assisted, so to make an accurate forecast for the year, I’m just going to take that last month and multiply it by 12. With the other versions included, that’s about $110K for the year, assuming it doesn’t tail off more.
About $20K of that went on one-off payments for various things during development, so our team of six would have to share $90K between them. And this is skipping over inconvenient details like paying tax, insurance, rent, utility bills, server costs and etc., bringing the useable total nearer $50K."

They included this really interesting chart, which they said was more or less mirrored in iPhone, PC, and Android sales.

The article also talked about 3 tiers of players - freeloaders, the $3 min purchase folks (me among them), and the "Whales".  Whales -- for Devs, it means people who over-spend.

This Combat Monsters article talks about how devs actually got complaints from Whales that there wasn't more content to purchase.  HA  (Not going to hear something like that from me!!)

What I found most interesting is that I play this game regularly, dedicatedly, and I hadn't even considered that I only paid $3 for the game.  Normally, I wouldn't have paid anything for a game like this -- but something about it charmed me and I wanted to show some support.  Apparently all that didn't cut it.

They have some really great commentary at the end.  Someone read the article & wanted to try it as a 'paid game' by buying the $3 tripler.  They couldn't get the transaction through & blamed Apple.  Dev's responded, "re iTunes, it's not without problems at times, but at least it's not google - they're still throwing away about 10% of all developer earnings through "internal market error". Too busy making new doodles I guess."

Apple is so much more 'locked down' for Devs AND takes such a big cut (33%?) but they also have a lower piracy rate.  I never had any probs buying stuff from Apple, but ... I wasn't inclined to buy much. Google Play Appstore is strangely just as flawed as Apple's Appstore, but I can buy stuff (& do often)!  However, I can also very easily download stuff & block permissions (effectively getting paid apps free) and it's almost as easy as dloading it thru Google Play.  So I'm surprised the complaint is not more about piracy & less about Google having some accounting issues.

I'm writing this blog post b/c this is one of my fav games, and it's interesting to learn how they don't feel happy about their $110k game.  Better luck next time, Dev's!

Game info:  Combat Monsters is a really cool game.  It's a 'strategic CCG' (collectible card game) played on a hex map where players heroes use monsters, gear, spells, and runes to kill the other hero.  There are a lot of strategies here, but intelligence generally prevails over an EXPENSIVE deck, and luck is also often a factor.  I'd say this game has a lot of replayability.
3 comments:

WAR -- it's really fun! Or so says the videogame industry. But I say NO! 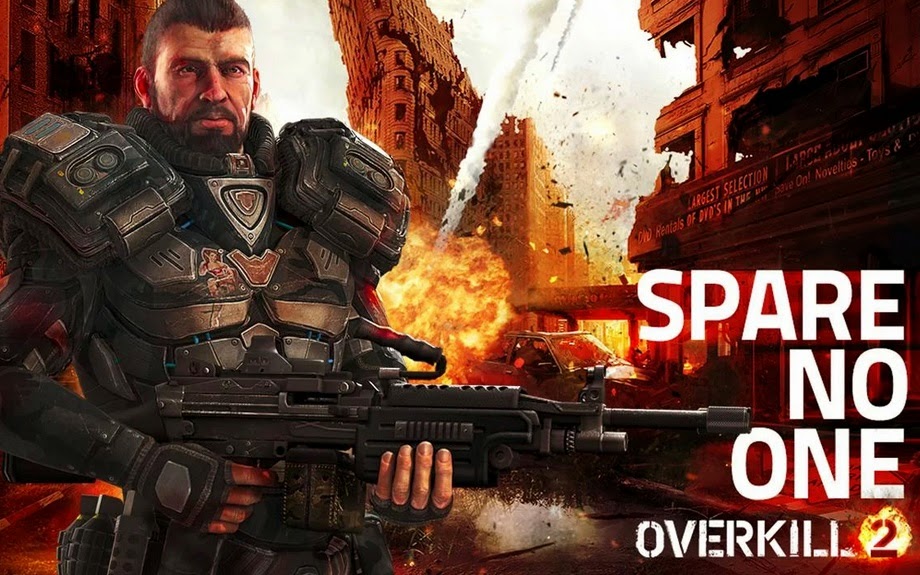 I've had numerous disagreements with people who argue that videogames don't make people more violent, or that violent TV/movies aren't unhealthy for people, etc etc.I take the viewpoint that mediated violence (or in most cases mediated ULTRAviolence) is unhealthy for humans in society because it promotes only the best of violence and downplays the true horror.

The worst of videogame violence includes: Players get multiple lives, guns are portrayed as really cool, dead bodies 'vanish', dead bodies produce 'coins' &/or 'experience', killing animals & dogs for coins/exp, etc.  Besides these failed representations of warfare violence, there's being killed by people on the same side (so-called 'friendly fire', a propagandistic term), the scarred landscape of war, the lack of any real backstory to the piles of dead corpses, the tragic loss of potential when people are killed, and the whole foundation of wargaming as entertainment which damages human perspectives by decoupling atrocity from morality.

For healthy people, playing a game where you shoot people in the head all the time may at best do nothing besides create some desensitization at violence and killing.  But for people with mental health issues, or going through personal tragedies, or with terminal diagnoses and nothing to lose -- these 'games' could be like practice arenas to hone their skills at violence before unleashing their violence on the real world.

When a young kid went to their highschool in my old neighborhood (El Cerrito, CA) with a rifle, a samurai sword, a chainsaw, and a bag full of pipe bombs -- it seems clear that this kid was inspired by videogame violence.  Luckily this kid was taken down by a brave teacher when their chainsaw wouldn't start.  But this kid may have been studying killing by playing killing videogames as much -- OR MORE -- than learning anything in school!

What's the solution?  Encouraging the videogame / entertainment industry to put more R&D into other entertainment aspects of the fantastic, such as --> exploration, experimentation, discovery, acquisition of new skills, sport, fitness, amazing feats, amazing teamwork, and more.

The most gory violence is actually *THE LOWEST COMMON DENOMINATOR*, rather than the highest.  We can all do so much better than this epic lacking of creativity.

Gowingo -- How can a graveyard shift worker overcome excuses for not working out?

I just posted this comment to Gowingo fitness blog after reading her article about Top 7 Lame Excuses for Not Working Out
( http://gowingogo.blogspot.com/2013/10/the-top-7-lame-excuses-for-not-working.html )

I never know who's reading my blog, so if you have any suggestions, please let me know & post a comment?

I used to be fairly fit and work out regularly (martial artist, swimmer, etc). ~ 3 years ago I lost my job and finally got a gig doing graveyard shifts (11pm-7am) 4 nights a week. I also got married & we had a kid, so I do my four nights and on the 5th night I 'switch back' to daytime hours & sleep nights for 3 nights. (In other words, my work schedule blows.)
So after 1 year of this schedule, I was still swimming 2-3 days a week. After 2 years, I was more and more tired and was lucky to workout 1 day a week. Now at 3 years, my workout schedule is completely shot, I'm sleeping more hours than I used to, and I'm losing muscle tone.
My regular excuses are a) tired, b) feeling sick/headache, and c) various old injuries.
Any suggestions?
My latest thought is to download/buy some home workout videos & do stuff at home. I wake up at 7pm, put the kid to sleep, eat dinner (breakfast) around 9pm, and head to work at 10pm.
I'm thinking maybe I could do some cardio at 8pm, weights, or yoga. I tried P90X, but that was a bit too vigorous for me -- and the workouts took too much time.
Any suggestions or advice would be awesome!!
If I stumped you also, that's ok too.
PEACE

Wife got a nasty cold, baby got it too, and then... I didn't get it.  I was the good support Dad, getting grub and trying to be supportive -- while still working the graveyard shift (and thus sleeping 8 hrs in the daytime).  Baby suffered, wife suffered, and I tried to be the support.

And then I got it.  WTF?  I got clobbered by one of the nastiest colds...  I was wandering around (between the bed & the couch & the toilet) making zombie moaning noises "Uuuuuuugggghhhh" and "OooooOooOOoohhhh", hocking thick green & yellow loogies, and snorting constantly because it was such a challenge to breathe.

After missing one night of work, I thought I was up for doing a graveyard shift.  WOOOPS!  That was dumb!  Not only was that night a night of pure hell, but I felt worse for the next 3-4 days.  Wound up taking the rest of the week off with sick days.  Blech.

I barely ate, I drank a lot of water, spit up a geegob of phlegm, and slept an extra 4+ hours a day.

Almost healthy now!  YAY
Glad I had a doggie blanket. 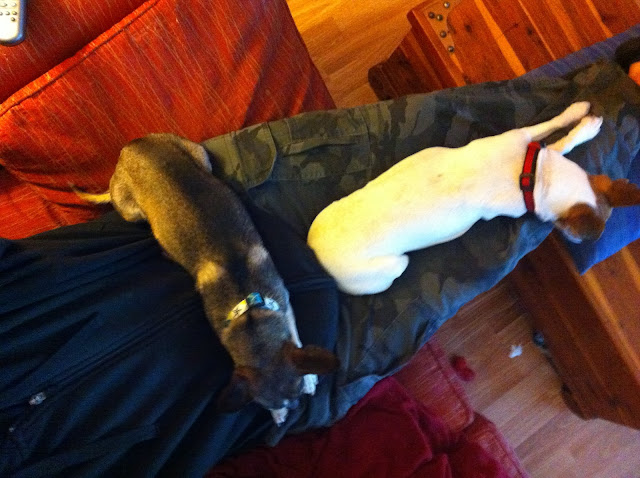 Funny how feeling so shitty can make me feel so grateful just to feel normal...?
No comments: