Could be mere conspiracy stuff, but these protestors impressed me when I was in NYC. I snapped these pics in March 06.

Was the WTC
collapsed? 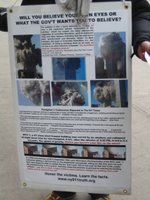 Why are the stories about
the 9/11 terrorists so bizarre? 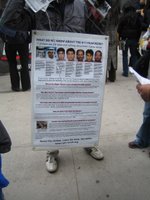 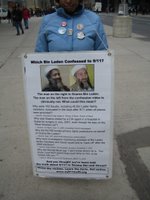 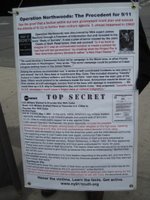 Protestors at the WTC 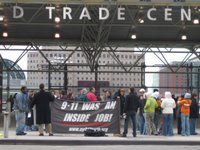 I think there's too much weirdness around the whole 9/11 affair, like G.Bush sitting for 7 min's while the USA's getting attacked, flying the Bin Laden's home while all planes were grounded, immediately saying that now the USA has to go after Iraq, or the lack of evidence of the plane hitting the Pentagon.
I mean, I don't trust Bush at all. Why should I?
A highschool acquaintance said, "Do you REALLY think G.Bush was complicit in the attacks?"
My response: While Bush is clearly incompetent and hijacked 2 US elections to achieve the office of the Presidency, I have no direct evidence that he was complicit -- however, I think he KNEW they were going to happen and he was on vacation. Or perhaps he deliberately allowed it to happen, since he knew he would have far more influence as a 'war president'. A guy who clearly breaks the laws often (Florida election, AWOL, no-bid contracts to Haliburton, etc) seems more likely to do it more often -- especially if he gets away with it so often.

What G.Bush is for me (and much of the USA) is a humiliation, a sign of the collapse of the USA, and a strike against freedom and truth across the Earth. And those are his aspects w/o considering any conspiracy theories.
Impeach Bush .org!!!
No comments: