Don't get me wrong, I love my US of A
A grand cross-ethnic mixer with only minor slavery.

No genocides here, the history books confide,
The Indian natives were more of a tribe.

Minor slavery and minor genocide, quite a downplay
from the World War Two horrors of the evil Germany.

I'm a Jew writing, and I feel the enormity of death
and the numbers of dead are quite similar in breadth.

Six million, nine million, numbers too large to imagine,
We had all these as well, killed by germs and forced marching,
Killed by whips, guns, rapings, beatings, but not defeating,
Killed the children and women equally, no specialty treating,
Killed by old cruelties now too horrible for repeating.

So many folks that leapt overboard at sea on way from Africa,
Who of us can imagine greeting a New World so tragically?

Best of all is the USA's staunch refusal to officially apologize
No matter this deliberate ignorance seems unsavory, unattractive, unwise.

For hidden under the digital media disinformation policies,
the unreported criminals are feasting on more stolen delicacies.
No comments:

The Fountain - 3rd viewing and it's still amazing!

Just saw 'The Fountain' on DVD for the first time. I saw the film in theaters 2x previously. Even though this DVD was playing on our projector with reasonably good sound, I'm grateful I saw it in theaters. (THIS IS WHY)

The power of the film visually is so great. It covered a lot of what I wished would be shown in SciFi fantasy -- deeply positive visioning for the human experience.

People, can we focus less on ego and holding tightly to this reality and focus more on earth-positive values, de-weaponizing / de-militarizing the earth, and embracing multi-cultural viewpoints? Oh, and also allow people to die and rejoin the earth for awhile ... until they are reborn in new forms.

Core concepts in this film were so strong. America is still spiritually so young that culturally we haven't learned to look at things like mortality or the balances of life and death in a healthy 'earth-positive' way... I'm grateful for this beautiful adventure around this most powerful of subjects.
No comments:

The movie 'Starship Troopers' was hilarious IMO -- social satire and action film. It had the humor of looking at itself not as a flat 'space combat' film, but as more of a genre-challenging film.

The standout fact for me was that the humans are just as vicious as the bugs in this film ... if not more. And the director pointed this out by the Nazi uniforms and the sheer disregard for alien life.

Now that I've read the book, I give HUGE PROPS to the screenwriters on this film! 90% of the film they came up with except for a few names, humans fighting space bugs, and the concept of a space army.

WHAT A STRANGE BOOK!!! 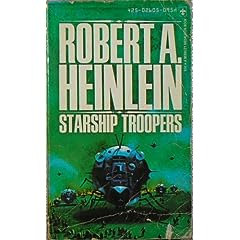 a) premise is intriguing -- what would it be like to be space 'Militia'
b) story has a few good language gimmicks, like "on the bounce" and "cap troopers" which I had no idea what he meant until 1/2 way thru -- as intended
c) horrible characterization
d) some military 'worship' and exhoneration of the virtues of being beaten into order and hierarchy
e) all before computers, so the scifi tech is all the more old-school (but reminds me of what Bush wants the military to be like)
f) father /son relationship is ... CRAZY

Anyway, that's about it. I can't recommend this book, because there's not much in it other than a framework for something that could be a good story.

For a sci-fi junkie like myself, Starship Troopers the book doesn't cut it at all. The movie, on the other hand, is a solid viewing for any sci fi fan!
8 comments: