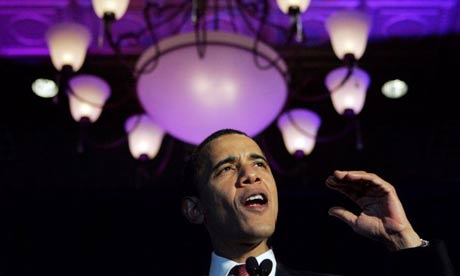 Have you wondered why it's newsworthy that Obama has to take bold steps to protect homeowners? According to this Yahoo News article published today, the Treasury Department cannot prevent banks from using the bailout dollars for exhorbitant executive salaries.

Obama commits to support homeowners:
Obama's comments and the letter from House Republicans came a day after the Government Accountability Office, in the first comprehensive review of the rescue package, concluded that the Treasury Department has no mechanisms to ensure that banking institutions limit their top executives' pay and comply with other restrictions.

So far, the government has pledged to pour $250 billion into banks in return for partial ownership. It also has agreed to provide $40 billion to troubled insurer American International Group. In addition, $20 billion of the money was invested in Citigroup and another $20 billion went to the Federal Reserve to help ease credit stresses.

House Financial Services Committee chairman Barney Frank said Treasury's response comes "very close to telling the institutions that they will be free to use the funds as they wish."

If that $750 billion bailout went to the people themselves, ie US Citizens, we could all buy homes and have money to spare. It's already public money and should not be going to subsidize private industries which have poorly allocated their assets in risky debt -- particularly not to the upper class 'executives' of these failing companies.

Hey Bush, what happened to your "no subsidies" and "free enterprise" and "free market" slogans when your rich buddies screw up the US economy as badly as you screwed up USA Foreign Policy?

I was having a talk with some friends and we came to the conclusion that if it had been one or two banks doing these horrible banking practices, the CEO's would have been fired and the banks would have folded. But when ALL of the banks (with a few noteworthy exceptions), under the rubric of 'deregulation' and incentives for economic expansion, are allowed to practice STUPID economics which put everyone at risk ... THEN we are supposed to reward those institutions with public funding without ANY requirements, stipulations, or punitive treatment?

The same approach applied to credit card debtors sounds a little different: when a person gets way over their head in credit card debt, and then somehow loses their income because of gambling and is suddenly 'in the red', would we want the government to step in, pay off all their debts AND get them their salaries back -- without any consequence?!?!

Wasn't the issue originally the 'home mortgage' crisis? Why on Earth are we rewarding bankers (people with economics degrees and MBA's) for screwing up? Bush & co have succeeded in keeping the focus on the (stupid) banks and lending institutions and off the people that are actually suffering. Surprised?