Ever since I backed this, I've been obsessed over Mobile Frame Zero: Rapid Attack, the Kickstarter project which uses Lego to make little mini robots and battle it out with a variety of d6 dice.  (Their Kickstarter project raised $82,499 when they were seeking a $9,000 goal.  Guess they hit a solid genre niche?  Go Kickstarter!!)
I made a Pinterest board which was originally called Mobile Frame Zero, but I renamed it to BadAss MoF0 Mecha Frames for a bit more flavor.  (I could look at these cool designs for days!)
I just got my first orders of Legos (ordered thru Bricklink.com) and was so excited to build a first mech frame -- but my build pretty much sucked.
Now I have a good number of $$$ worth of Legos, but there are certain key pieces which make it a lot easier to make something cool.  And guess what?  I don't have those!!
Good news is I have one more order from Bricklink hopefully coming soon, so maybe that's on the way?

Anyway, I hope to eventually build a few cool looking things -- copies or unique, doesen't matter to me.  Me want cool bots!

I have another MoF0-related Lego story -- I was so psyched about this game that I googled Lego shops, found Play Well in Marin, and paid a visit to buy my MoF0 bits.  I was digging thru their large variety Lego bins for 90+ minutes or so, and they had very nice helpful employees -- and when I went to the register I figured I'd pay ~ $40 or so.  Nope.
The total was over $140!!!  I talked to the register guy about how we might drop the total, but he became unhelpful at that point.
So, when another customer walked in, I just ... left.  I felt really strange about that, but I was not (and am still not) prepared to pay $140 for less than 1lb of Lego blocks.  Sorry.
(Oh yes, I got almost all the same stuff on Bricklink for about 1/3 the price.  I had to pay shipping & deal with multiple vendors, however.) 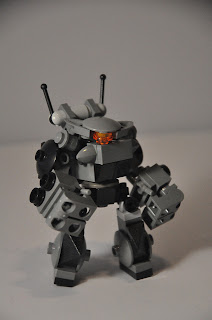 Bottom line -- it's not about just having generic Legos -- you need 'the right' Legos and a good eye for design -- as you can see if you check out these people's amazing designs:
Soren (one of the original designers of the game, very talented);
and there's also WangTech; dbol39; Countable Nouns; A Yates;
Here's a pic of Mitten Ninja's 'OHI-04 Grizzly' from Flickr;
and there's a ton more great MoF0 designers out there!
You can always search Mobile Frame Zero on Flickr to find cool images & the latest neat builds.  Also you can learn which bricks to get & builds from the "Mobile Frame Garage" blog.
And here's the Wiki: http://mobileframezero.wikia.com/ which includes rules variants, builds, websites, and more.