I spent the week working on a short film, The Event, for a short film competition at Project Accessible Hollywood - PAHNation.org.

Pablo's film is called "The Event" by Team Pablo, online at http://pahnation.com/theater.php?loc=bayarea08#. 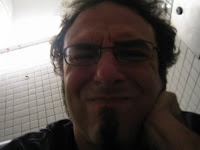 we also had Steven Moon as our composer. I didn't get his picture, but he mentioned his webpage.

I got to coach a team for the event. Pablo was an alternate called in after a last-minute cancellation by 'Team Russia'. Pablo had only a treatment, but he crafted a complete story the night before the shoot. I gave him some pointers and he created a well thought out screenplay. Filming was tricky because we had a few locations, and we had a few tech gliches with mic and 'white balance', but other than that it was all good and all 'auto' (exposure & focus). The finals looked great. Steven's music added the final touches to take it to a real mysterious sequence.

I also submitted this piece, 're-spinnin tone poem', which I thought was kinda cool. It has an old song I made plus video shot on a 'flip video' handheld camera, the idea was to use video to illustrate a song.