I'm reposting this here just so my RANT can be preserved on my BLOG.  I think this RANT had some gems in it -- capable of getting me lynched my really crazy Christians who believe in 'punishing the heretic' (the same idiots that don't understand that Jesus was a heretic in his lifetime!!!   Morons!).  And these people are the ones that so fear Islam -- they don't see their own extreme religiosity (which conveniently ignores the 10 Commandments) as ignorant, regressive, primitive.  Oh well.
Hey!  I haven't started my 'official' rant yet!  (That was all pre-RANT rant.)

My cousin posted the following on Facebook (very innocently):
"Let's all just tell eachother how we really feel. That would be fun."
So I ranted (@4am):
I feel that the USA is being destroyed by Republican Neo-Con Fascists, many of whom are White Aryan neo-Nazis. Their main goal is to take the wealth from public hands & put it in the hands of a few white families: many of whom believe they are God's chosen, the 'Visible Elect', and that when Armageddon comes, the fact that they gather so much stuff (ie stealing the wealth from the masses) earns them a really nice cloud in Heaven. (Or perhaps they know they'll burn in Hell, which I think most of them fear b/c of the bad things they do to steal all the stuff.)

THIS is quite disturbing: that you can't argue rationally with people who believe in Armageddon & Judgement Day about Global Warming (they don't care b/c Armageddon), Women's Rights (b/c they believe Jesus said all sperm is holy?), Gay Rights (b/c they think Soddom & Gomorah is about gays -- but it had far more to do w/not treating visitors well & rape & so on), or stopping war against non-Christians (again Armageddon). 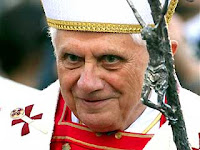 The main problem, IMO, is that people allow the Roman Catholic Church (who blocked it's members from reading the Bible, put people to death for 'Heresy' & wouldn't translate the Bible from Latin until the Protestants translated it independently) to misinterpret a very influential book about a famous Jew & continue a cult which doesn't understand anything about Judaism, or even that the specific Jew they think was God actually practiced JUDAISM, not Christianity.
Last point -- Christians are constantly preaching about 'the Anti-Christ', someone/something that completely misinterprets Jesus' message & does all kinds of harm. Hey! Look! It's right there in front of us, namely Pat Buchanan, Newt Gingrich, Bush Jr, etc etc.
The 'Double Speak' (from '1984' by Orwell) has been perfected by this group. Bush said it best, 'We have to kill all the terrorists b/c they hate our freedom.' And then the USA invaded Iraq & killed ~ 150k innocent people (and destabilized 13million people), and is currently killing innocents (including many children) in Afghanistan using unmanned planes firing Hellfire Missiles into groups of civilians -- "to stop terrorism".
So is that enough about how I feel? Not sure it helps much.