There was a ridiculous article tagged in Yahoo News as one of the most read Blog articles, from GateWay Pundit, "Bush Saved Hundreds of Thousands of Iraqis From Saddam's Reign & Clinton's Embargo", about how killing Saddam Hussein actually cut down the number of dead folks in Iraq because Saddam Hussein and Clinton's blockade killed many more people. It's a stupid, misleading article.

Of course, I had to respond to that -- but what a joy to discover that a bunch of right-wingers had commented. So I hopped in there also.

It's so hard to discuss articles like these b/c they start with so many dumb assumptions. The idea that a foreign country can attack another country (for no reason), occupy it for years, steal from that country, and THEN argue that it is helping those people ... Sounds vaguely familiar. Colonialism, I presume?

Since my rant is copied below, I'll copy/paste some of other people's inane posts so we can get a chuckle (or a groan):

I'd make the point that these comments are freakin' dumb (and abrasive), but they do that for themselves, no?

Here's my RE-posting of my 3am RANT on his Blog: 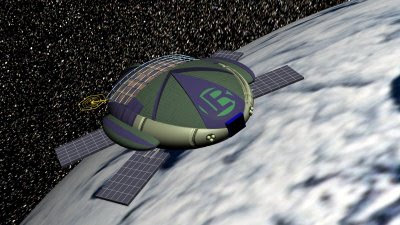 And here's a pic of the 3D animation I'm working on for LAUNCHED short film.

I've been pleasantly suprised at how good it's coming along.

This still shows the LifeRaft vehicle where the crew lives and is 'trapped', floating above the Earth.