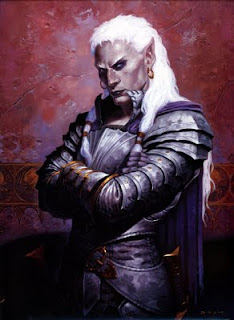 RPOL.net is an interesting site. A facebook friend John suggested I come on-board a game & give it a whirl. He offered to GM something, but nothing has begun yet. After playing Dungeon Crawl addictively for a few weeks, the 'play by post' phenomenon seems much more interactive and keeps the feel of real roleplaying... sorta.

Oh, did I mention the game we are playing is AD&D (1st Ed)? It's almost like a trip back to highschool. However, on RPOL.net you can RTJ ('request to join') into any kind of game hosted on there -- they have scifi games, 'free form' games, anime, horror -- or you can attempt to run your own game. For a gamer like me, this is quite a bonanza.

The site is setup really well also. They have multiple 'roles' (ie GM (game master) & player), each with unique abilities on the site.

The GM can setup NPC's (non-player characters, ie anyone that is not a player) with stats and backgrounds, and sets the scene. The GM also posts rule mods, makes decisions, and so on.

Players accounts are more limited -- their posts will all be as themselves, where-as the GM can post as themselves or as an NPC. Players also can post a character sheet (between themselves & GM), a description for other players to see of themselves, and an avatar (ie a pic).

From there out, it's mostly posts, rmail (emails which stay on the RPOL.net site), and private messaging.
Some interesting caveats:
Posts are generally in normal type, speaking is usually in a color, and 'out of character' comments are written with [OOC: blah] tag. You can also use italics and bold type, like a standard webpage. Another helpful functionality is the ability to insert 'private messages' into a post, which allows one person to read a line of text (but no-one else). This can be helpful for posting dice rolls or a note (backstab my friend Fred) to the GM without everyone seeing the results, or for making plans and whispering to other characters.

The commitment for the game I joined, a GreyHawk game, a is to post daily. I think this will keep things moving along. It's also very helpful for my creativity.

RPOL.net is a free site, but they take donations. I'm going to see how this game works out, but ultimately I'll kick in a few bucks too, probably.

On a related tangent, I just met with my friend Allen to brainstorm and kick-off a project about a roleplaying game themed TV series. Having watched multiple internet TV shows that touch on this theme, it seems we both have some insight into what we don't like about the genre. Figuring out what we would like however is a different matter.
But we have a premise, which sounds great, and some unique ideas.
So now we're heading off to pre-production (writing, later casting, and then finding locations) and also some research on game companies that might want to help us succeed -- maybe even promote the project.
Goals: We are aiming to do a show where non-gamers would enjoy it, and obviously gamers as well. We also want to make money for our work, rather than doing everything for free w/o any compensation in the equation -- as has been the case for both of us recently.
My girlfriend seems to think that making a good gamer show is an impossible goal. Aha! A challenge!

In the middle of our meeting, a guy named Kimba hit us up and pitched us his TV show. He gave us a copy of the DVD to look at (and then took it back). He said he'd spent 10 years and $20k of his own money making the show, but was unable to get it screened or sold.
Find it online:
Youtube video is http://www.youtube.com/watch?v=Hv5U0rBMuBM
myspace.com/kimbascave

I just watched it. Whoa. Unusual and creepy, especially for a kid's show. Kimba said his show was like Peewee Herman, but I'd add -- if Pee Wee was communicating to Satan. (At one point, Kimba gestures to his demon friend, and his friend blows fire and conjures a knife into Kimba's hand.) Seems like 'knowing your audience' might've helped this project a bit.

Lexann and I went to see Zhenya & Desiree's new band play their first gig. Their band is currently called "FishBiteFish", and it was a good little party. We both figured Desiree could sing, and we were right. All the band members seem very skilled.
We had a blast, dancing & chatting w/folks. I brought my friend Johnik, who randomly vanished for most of the party. I was concerned about him, but it was all OK, he just took a long walk with a random dude (a DJ) and they had been talking. We reunited via cellphone just before leaving, so he got a ride back to E.Bay.
Some dudes were giving Lex the vibe, but ... she's hot, it's just part of the deal. I can live with it. HA We all laughed about Robin, a dude that always leaves a 'too intimate' lingering touch when he passes by. Gropey, I guess you could say.
It was a great surprise to see Denis, an old Burning Man friend that I had not seen in years. I met Denis and Xian at Burning Man back in 2003, and when they split up I kept relationship with Xian but hadn't spoken to Denis in ages. It was nice to see him, and I was stunned at seeing him after the years b/c he seemed radically changed -- ie, he seems no longer angry. Perhaps graduating college, having a child, and getting married do that?

I'd like some of that too! Um, I mean, to feel happy, grounded and chill.
Or maybe I'd like it all? HA

Oh yeah, Lexann and I are off to Burning Man at the end of the month!!!! I'm excited and nervous, very aware of what we need to do to go, and ... this is going to be FUN! If you've never gone to Burning Man, it's worth going. From my perspective, it is a hallmark even of the biggest paradigm shifting phenomenon of the 21st Century, the DIY (maker's) Festivals. Post-post-modern society is not about producers & consumers, it is about everyone being enabled to produce consciously, and everyone being enabled to consume what they feel best represents their self-concept and morality. Plus, I love the artwork and the 'Mad Max' feel of the thing.
(This pic is from Gary Cohen, http://www.portraitsontheplaya.com.)

Thanks for the press
but....
Before you critique My monstrosity
watch the whole thing not just the trailer. ...I would sincerely like to see you there thanks again.All smiles
K.

KIMBA'S CAVE Will be screening at
THE ARTIST TELEVISION ACCESS
992 Valencia Street, SF
April 15th
Admission is $5.00
Doors open at 7:30 0pen screening is from 8:00 - 8:45 then 15 minute intermission.
KIMBAS CAVE begins at 9:ish and is approximately 24 minutes long.
(free) fresh pastry ...
BONUS
$1.00 off if you bring a puppet friend .(Puppet must enquire about the offer)