Say NO to SOPA/PIPA -- a day of protest 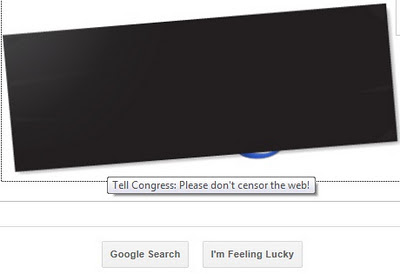 Google & others are protesting, thought I'd join in -- b/c the internet doesn't need 'protection' from 'Intellectual Property theft' at the cost of having a free & open internet!!!
Also, copying is not piracy.  We must keep our language and filter out the false phrases.  One false phrase is calling copying piracy.  'Piracy' is stealing something from someone such that the owner no longer has access to that thing.  'Copying' (which has been called 'sharing' at various points) duplicates something and no one loses the use of that thing.  The only losers in copying are companies who want more profit from the thing, and are willing to sacrifice and sabotage and criminalize Constitutional rights (such as freedom of press, freedom of speech) in order to force people to purchase (and re-purchase) access to content which they created.

Other bogus words include:
The following text is copied (word for word) from Craiglist's protest today -- http://www.craigslist.org/about/SOPA.  Thanks Craig Newmark & co!
Corporate supporters of Senate 968 (PIPA) and HR 3261 (SOPA) demand the ability to take down any web site (including craigslist, Wikipedia, or Google) that hurts their profits -- without prior judicial oversight or due process -- in the name of combating "online piracy."

PIPA and SOPA authors and supporters insist they'd only go after foreign piracy sites, but Internet Engineers understand this is an attempt to impose "Big Brother" controls on our Internet, complete with DNS hijacking and censoring search results. Incredibly, many Congress Members favor this idea.

Where does your Member of Congress stand on PIPA and SOPA? (Project SOPA Opera)

PIPA and SOPA Are Too Dangerous To Revise, They Must Be Killed Entirely

Congress needs to hear from you, or these dangerous bills will pass - they have tremendous lobbying dollars behind them, from corporations experts say are attempting to prop up outdated, anti-consumer business models at the expense of the very fabric of the Internet -- recklessly unleashing a tsunami of take-down notices and litigation, and a Pandora's jar of "chilling effects" and other unintended (or perhaps intended?) consequences.

There is still time to be heard. Congress is starting to backpedal on this job-killing, anti-American nonsense, and the Obama administration has weighed in against these bills as drafted, but SOPA/PIPA cannot be fixed or revised -- they must be killed altogether.

Tim O'Reilly, a publisher who is himself subject to piracy, asks whether piracy is even a problem, and whether there is even a legitimate need for any of these bills.